Courts must be booked per hour through the Restaurant (Telephone 96 503 8813 or email jacaranda@alteagolfclub.com  There is no charge for members but the cost for guests is €5 per hour per court.  There are 2 courts available.

You can use you own boules or request a set from the restaurant bar. Members and guests must pay a €10 deposit per set for the use of the club boules, which will be refunded when you return the complete set(s) to the bar.

Both teams select their boules. Each team’s boules have groove patterns that distinguish them from the other side’s boules: that way, they will be easy to identify when counting up points. When playing Singles or Doubles, each player uses three boules and for Triples each player uses two.

The difference is that traditional bocce is more of a bowling game, whereas petanque is more of a tossing game, like horseshoes.  Bocce players take steps before throwing, petanque players stand still. Bocce balls are usually rolled palm up, petanque balls tossed palm down, so they get backspin upon release.

Toss a coin or agree which side goes first.

The team that wins the coin toss chooses the starting end and then selects one of their players to throw out the jack. Normally the starting location is indicated by a circle, but you can just make a mark in the sand that everyone should stand behind when throwing. The jack should land 6 to 10 metres of the starting line and one meter from any obstacle, but this can vary if all players agree.

All boules must be thrown from behind the line. The player attempts to throw the boule so that it lands as close to the jack as possible (it is okay to hit the jack).  A player from the opposing team then attempts to land his boule closer to the jack even if it means knocking his opponents out of the way. The boule closest to the jack leads or is said to be “holding the point.” The other team must continue throwing boules until they take the lead or run out of boules.

There is no order that team members must follow when throwing their boules however, they must only throw their own boules and they must go one at a time from behind the line. If they take the lead, the other team then tries to recover by landing a lead boule.

Once a team has used all its boules, the other side is allowed to throw the rest of its boules. When all boules are thrown, the points are counted. The team that has the boule closest to the jack wins the round. In addition, they also receive a point for each boule that is closer to the jack than their opponents closest boule. Only one team scores points during a round.

Once the points are counted, the next round begins from the opposite end to the start with the previous round’s winners drawing a new line. The winning team then selects a player to toss out the jack from this new starting line and then throw out the first boule.

The first team to earn an agreed total of points wins the game.

If you wish to help to form or to join a group to play regularly, please contact: 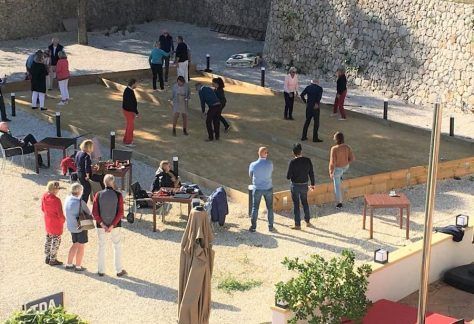 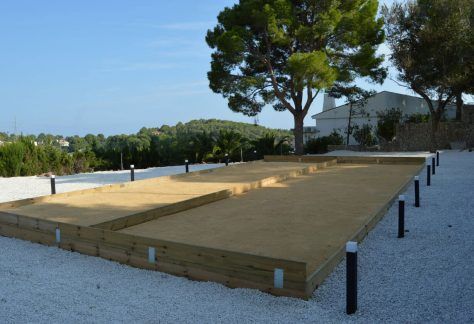